This a jumping metric test I made for a now cancelled collaborative project. Our team was going to make an updated version of the 1995 Japanese PlayStation game Jumping Flash. I was tasked to mimic the scale and jumping system mechanics from the original game. 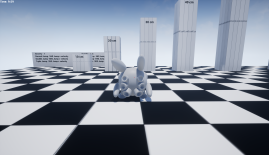